* In case of any delay in receiving the OTP, you may verify it later. Please proceed without verification.

Enter your City name or Pincode

Hilly terrains and extensive verdant landscapes is the best way to describe the geographical map of Sahibganj in Jharkhand. In midst these hill ranges the vast spread of greenery is spread in such a way that the place can be ideally termed in Persian language “Damin-I-Koh” which means the beautiful “skirts of hills”. Sahibganj is located at a distance of 33.7km from Kathiar district, 41km from Purnia district and 62.6km from Godda district. 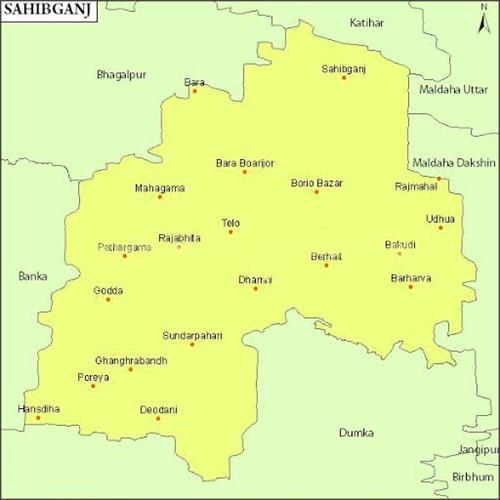 Sahibganj is located on the meridians, 24°42’ and 25°20’ north latitudes and between 87°25’ and 87°54’ east longitudes. Based on the banks of River Ganga, the area is considered to be fertile and a highly cultivated area. The geographical map of Sahibganj can be broadly divided into two major divisions. This is based on the geographical conditions, land resources, climatic condition, cultivable land and the inhabitants of the area. The first type is the slopes and hills of this region which mainly forms the forested area and a part of Damin-I-Koh. The major blocks forming a part of this category are Borio, Pathna, Mandro, Taljhari and Barhait, blocks with major inhabitants being the Santhal Tribes, Mal Paharia clan and other Paharia Tribes. While the valleys ,major concentrate on cultivating paddy, the people on the hill top use the region for maize farming using the rain water at its best. The Barharwa blocks, Udhwa block and the famous Rajmahal hills forms the second type of geographical division consists of plain land with multiple uplands, depression and ridges. Three major rivers flowing through this region are Bansloi, Gumani and the Ganges making the area extremely fertile and suitable for farming.

The course of River Ganga in Sahibganj is quite unique having its entry from the north western side bordering the northern side of Sahibganj and then flowing eastward till Sakrigali, then taking a sharp turn to the southern section forming a southern boundary to the area till a place called Radhanagar situated close to Rajmahal Subdivision. The River Ganga in its course down the years have shifted more towards the northern side, the reason why Sahibganj town is now based at a distance of a mile from the river banks was once situated on it. Ferry services are available from Sahibganj ghat , Manihari ghat of Kathiar district and Manikchak ghat of Maldah, West Bengal. The Bansloi River initiates from the beautiful Bans Hills located in Sahibganj district but in its course diverse to Pakur division which was recently separated from Sahibganj district. River Ghumani also flowing in this region emerges from southern part of Rajmahal hills and flows to Barhait valley and then joins River Mural and together it takes a south eastern coarse to join River Ganges but beyond the district limits.

The geographical features of Sahibganj district cannot be shared without mentioning its rich wealth of forested areas. The region was once one of the most vegetative, rich and extensive forested areas of the state. Going back to the history of Jharkhand state, one can find references of how the forest wealth, being a rich source of timber and other forest produce have been cut and sold by the early Zamindars of the region to earn revenue. This act of exploiting the forested region has resulted into making the area scattered. Moreover there are several villages located in this area who are depended on the forest produce for their timber, fodder and fuel requirements. Apart from these natural conditions like soil erosion, landslides are also responsible for destroying the richness of these forested areas. However the Government is taking measures for afforestation in collaboration with the forest Department so that much of the jungle wealth can be restored. The major trees available here are Sal, Teak, Bamboo, Simal, Murga, Asan, Jackfruit and others. Many of the forest produce in this region are exported to various others districts of the state and even beyond.

Warm and Temperate climate prevails over Sahibganj. The weather condition of Sahibganj can be broadly divided into three main seasons’ summer, monsoon and winter. Summers are usually hot with heat waves passing throughout the day. Humidity is less in this region. Summer months are from March to May where the average temperature ranges from 35°C to 46°C. No rainfall can be experienced during this time. June July and August forms the monsoon month in this region which sees sufficient rain fall. The annual precipitation in Sahibganj district is 1248mm whereas the precipitation reaches its highest peak in the month of July when it is usually near 323mm. Winter season prevails in Sahibganj from the months of November to February. The average temperature in the district during this time stays 5°C to 15°C. December receives the least rainfall here and January is the coldest month of the season where temperature may dip below 50°C.

According to the census 2011, Sahibganj district has a total population of 1,150,567 individuals which is approximately a growth of 24.01 percent against the population calculation of 2001 where it records to 927,770 persons. This is a similar picture to 2001 census when it recorded a sticking 25.91 percent growth in compared to 1991 census. As per the present calculation the district holds a density of 558 persons per sqkm. As per the sex ratio, the present scenario is 952 women per 1000men.
As per the records the child population of Sahibganj district is 221,955 where 113,220 are girl child and the rest 108,735 are boys. The child ration has seen a significant change where in the present census it stands at 19.29percent of the total district population in compared to 2001 census where it stood at 20.95 percent.Literacy rates in Sahibganj district have shown huge changes in the last few years. In 2001 census the average literacy rate here was marked at 37.61 percent but in the latest census of 2011 it stood at 52.04percent with 60.34 percent male literates and 43.31 percent female literates.

The major language used by the people here is Hindi. However Santhali and Bengali language are also quite popular and considered as native language.

There are four major soils available in Sahibganj district and they are red lateritic soil, loamy soils, fine loamy soils and fine mixed loamy soils. Almost all types of soil help in agricultural activities.
In a nutshell it may be stated that Sahebganj district is wonderfully located in a pristine enviourment on the banks of River Ganges. It is one of the best places in terms of tourism spots in Jharkhand. However summer season should be avoided for a better sightseeing experience in this region.

Comments / Discussion Board - Geography of Sahibganj